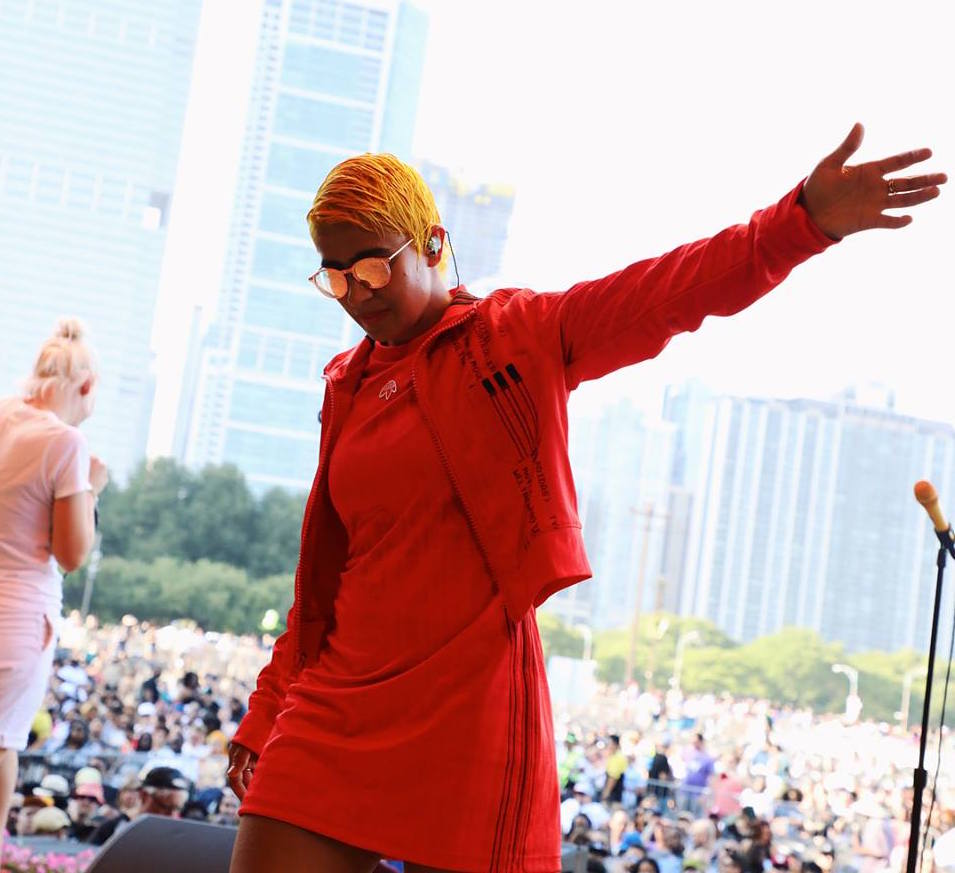 Right before her set at the Ace Hotel following her performance the day before at the Taste of Chicago for the infamous hip-hop group Blackstar (Talib Kweli and Mos Def), Madame Gandhi sat with us and discussed her EP Voices, the purpose she walks in, and her empowerment and growth over time. Her immense sense of self Madame Gandhi recognizes is vital to her artistry, and by sharing herself with her audience she has inspired others to pursue their passions and turn dreams into achievements.

Kiran Gandhi grew up in an Indian household in New York City. Early in life understanding that activism and spreading messages of hope and reassurance were woven into her fabric as a person. Since then she’s gone on to tour with MIA as her drummer, released musical projects of her own, and eventually run a marathon, which she gained massive publicity for because she bled freely and brought attention to a serious lack in resources for people who need sanitary napkins around the world. Gandhi’s fearless personality transfers into her music. As she goes on to explain further, her music encompasses her real life conversations and interest and those happen to be rooted in reframing how people perceive women, people of color, and all oppressed groups. 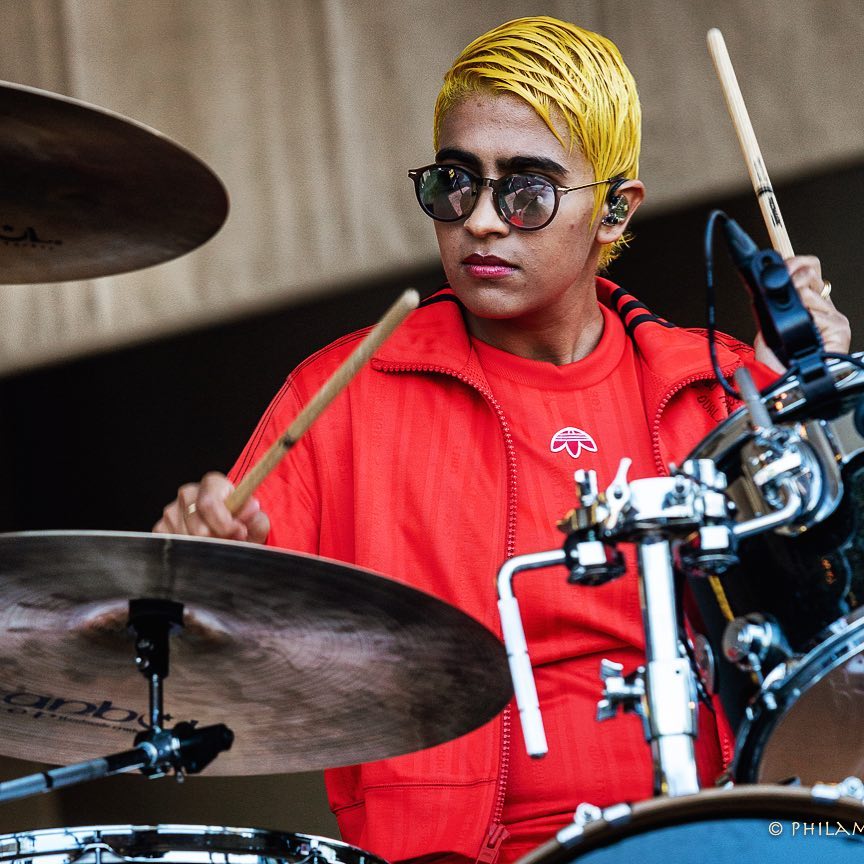 MADAME GANDHI: It’s all from my upbringing. The music came because I grew up in New York City. Every artist would always come through town so we’d go and buy tickets to the shows we wanted to see at really young age. Most venues were all ages so even at 15 I was able to buy tickets and just take the subway myself and go see a show. I would get so inspired. I wanted to be backstage. I wanted to be playing the drums. I wanted to make people feel happy. I just felt so connected to it and felt my most comfortable in music spaces, so when I started to play the drums, I used to get better and better just by watching shows. I’d go see a band play in a really run down venue in New York, they’d put big “X’s” on my hand because I was under 21, but they would let me sit in on drums or congas or shaker. I always wanted to contribute. Then with social justice, my two parents from India were very focused on social justice and activism. They really were all about making sure we as kids were always giving back. I was drawn to feminism just from a place of noticing that in pop culture women were not represented the way that I felt that they should be. Having a sense of giving back and serving a greater purpose of humanity was just very engrained.

AMFM: What empowered you to make such a bold decision to run freely during the London Marathon?

MADAME GANDHI: The intention wasn’t for viral purposes. It was just for myself. Which is so powerful. It was just, I’m about to run a marathon. I’m so afraid of running marathons to begin with and then now I have to do it day one of my period. I’d never even practiced running on my period. I just skip out. It was this personal reclamation for me. I don’t feel like any of these products would be appropriate for a marathon. I don’t want to be chafing. I don’t want an uncomfortable tampon. I don’t want a menstrual cup on me.  To me it was an obvious choice. I’d rather bleed freely than to use these uncomfortable products and I knew that was radical. Then the more I thought about it, I though, this is so strange that for me as a woman to prioritize my own marathon at this moment than my own comfort would be considered radical. Anyone on the sidelines who’d even try to shame me, I’d say why don’t you come run 26 miles, then we can talk. I felt very self empowered and it just made sense to me and I liked the radicalness and the punk-rockness to bleed freely for 26 miles. I do think we as woman, queer women and women of color grow up with so much internalized misogyny and internalized lack of self worth. Even me, I always talk to my internal friends about my emotional intuition and intelligence and my very cerebral intelligence. I can look on paper and explain to myself all the reasons I should have amazing self worth, but then I have butterflies in my stomach for things that should be there. That are just from society. And that run was really just proof that I can do anything. And when I crossed the finish line I just felt so proud, but I also felt so upset that so many women around the world who don’t have access to the products they need to be able to make similar decisions for themselves. The duality of it, the personal and then the political, when I wrote the story it resonated with people on so many levels. 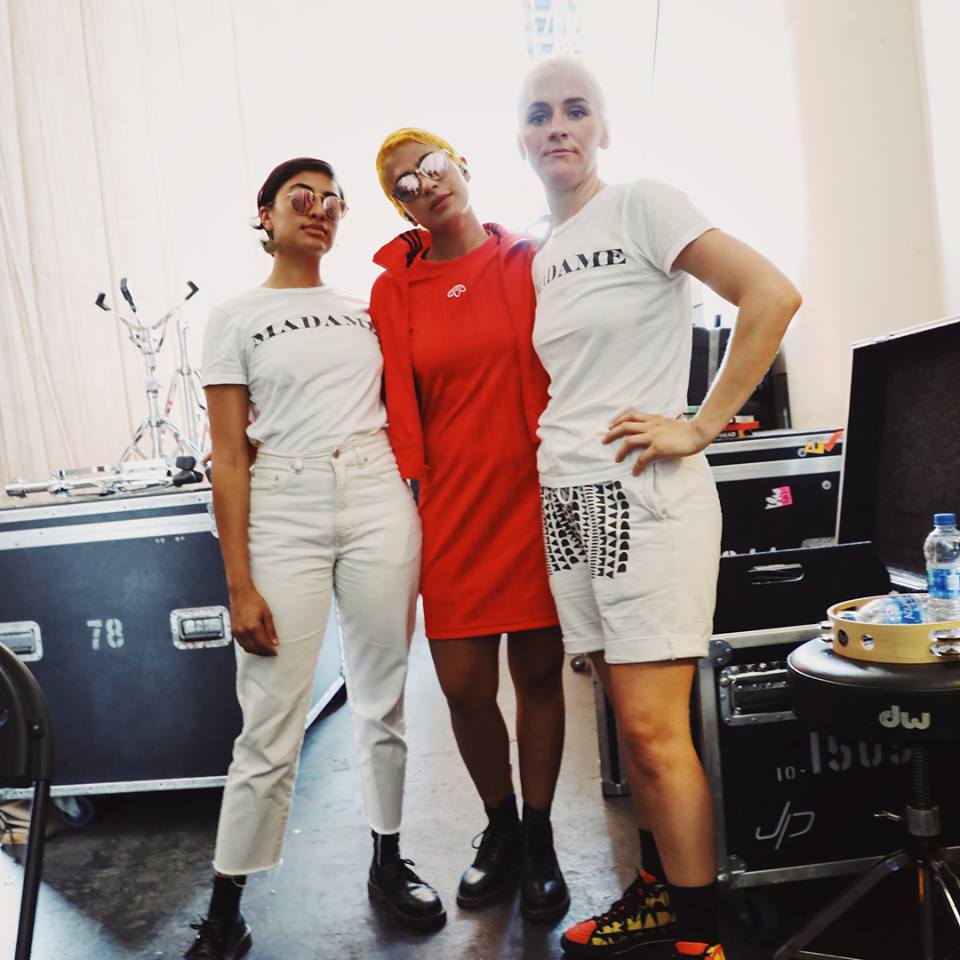 AMFM: Activism is very ingrained in your music as well, can you talk a bit about the message you hope to send through your music?

MADAME GANDHI: The message is number one for me. Which is different for many artists because many artists feel like to stay relevant I should now have a message or champion a cause. For me it’s always my feminism because what happened is I would just be in conversation with friends and by default all I want to talk about is analyzing gender relations and political power systems and shit. It’s kind of like I take the thing that I would be doing anyway joyfully, which is creating music, making music, making people feel good then using it to serve a higher purpose. I wish that more people did that because I do feel like each person has a purpose on this earth and if you achieve your purpose by doing it through the lens of the thing that you’re passionate about you’ll never burn out. Tomorrow I’ll go to a show no matter what. Tomorrow I’ll perform no matter what. Tomorrow I’m happy to deejay no matter what. Tonight for example I’m gonna deejay an entire set with no “bitch”, “hoe” or any of this oppressive stuff that people claim has to be in a deejay set because they can’t find any music that doesn’t have that. Give me a fucking break. I’m about to show you the opposite. So I’m using my music and using my passion to do the work because I will never burn out on it.

AMFM: What inspired the album art and how does it tie into the music?

MADAME GANDHI: My name is Kiran which in Hindi means ray of sunlight. Since I was young I always used to love the sun, yellow and oranges, vibrations and the warmth of it, and I love energy and kindness and being all encompassed with your worth and not letting go of that. I feel like that is a part of my power. As people and as artists I think we do two things. One is we focus on the things we don’t have and that we’re bad at instead of the things that were good at. I try my best to be like, I’m good at giving people love energy. Let me amplify that. Let me weave that into my music instead of trying to play it down because it might not be cool or whatever. The second thing that we do is we assume our own powerlessness, but not our own power. We assume we can’t do something instead of assuming we can. So the yellow is that constant personal reminder to myself. It’s about rebranding feminism. It’s about joyfulness and freshness and positivity and it’s the rays of the sun.