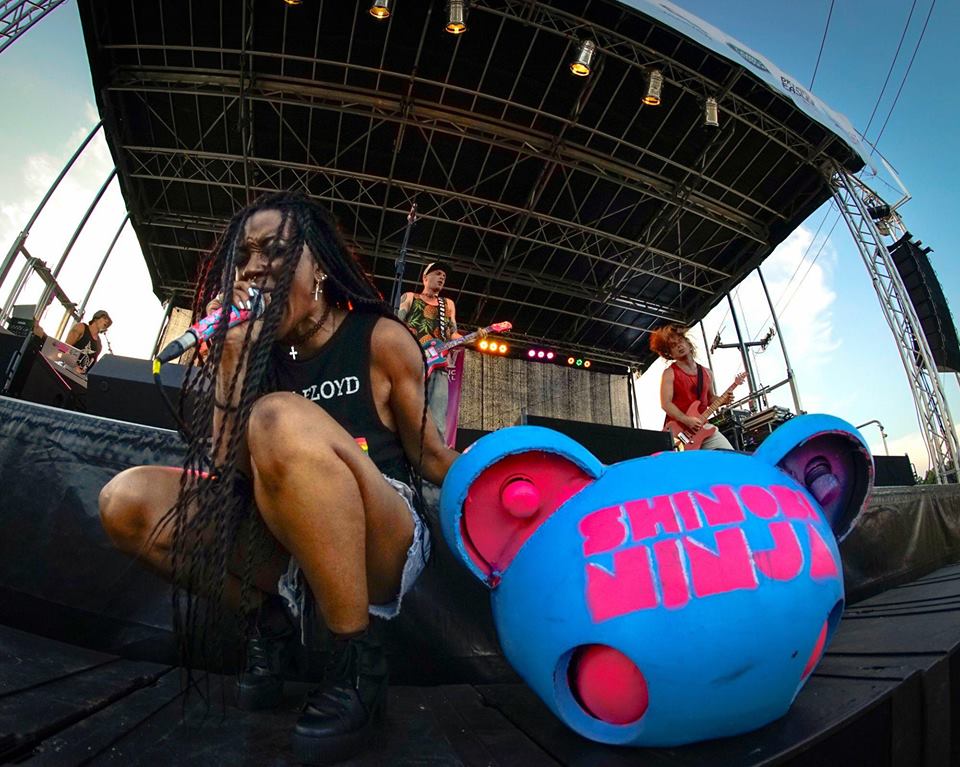 Bringing solid truth and unapologetic expression to your ears, ShinobiNinja is amping up in the streets of New York. This Brooklyn-bred band is known for their dynamic performances full of brilliant belligerence, with music that demands the body to move. They’ve dominated at different venues such as Afropunk, Summerfest, and Catalpa Festival with their original sound.

Consisting of Baby G, Alien Lex, Terminator Dave, DJ Axis Powers, Kid Shreddi, and Duke Sims, each member has their own, unique roots in music and in 2008 they fused to make an eclectically funked tone they classify as “hood rock.” A genre that can only be understood through experience. They are the kind of band that thought to create a Nintendo-style video game album, Shinobi Ninja Attacks! that was featured as Apple’s “Hot New Games” in 2010. They combine elements of melody, rap, rock, all in one ball of conscious chaos as if they were always meant to be heard cohesively. With features in Rolling Stone, Spin, Time, Ebony, and on MTV, ShinobiNinja is in route to transform the way we define music, genre, and sound all together. 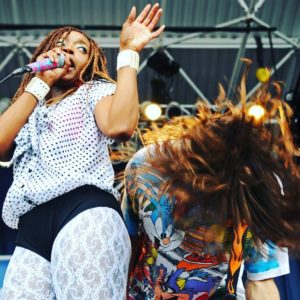 AMFM:  You described your sound as “rock hood,” can you explain a bit what that means to you and how that translates when you perform or how you view yourself and your sound as a band?

DUKE SIMS of ShinobiNinja: Being from Brooklyn, the hood is in us. We grew up loving Rock. So Rock Hood came together from those experiences. We play the music we want. We’ve been called every genre. And that’s beautiful. Because we make Music. We don’t make Genres.

ALIEN LEX of ShinobiNinja:  I don’t know man I just like to rock and have fun. We all like a lot of different kinds of music and I guess it shows because everyone always wants to put a label on our music and that can be extremely difficult to do.

AMFM: You guys have been playing music together for nearly a decade now, how would you guys say you have evolved as a group and musically over time? What have you learned about yourself being in a band that long?

SIMS: We’ve evolved into what we are now, which is very different then when we started. Energy moves around. Things get better. More focused. We figured out over time what works and how to make what works even better.

LEX: Without boring anyone with the details- in life we all make decisions every day and those choices add up to who you are. That’s 8 years of choices that led us up to this point. I could give examples all day but the most important thing to remember is that if you are humble, and willing to learn and push yourself beyond your own limits you can accomplish anything and will evolve naturally.

AMFM: What is a shinobininja?

LEX: Literally “Shinobi” translates to “Ninja” in Japanese but as far as I’ve heard it could have been a name for an ancient secretive sect of ninjas as well.

AMFM: Your rise as a band seems to be super DIY, and there has been this rise in musicians reclaiming or taking ownership over themselves, their music, and their art, how do you guys navigate your artistry in that realm?

SIMS: We DIY because we haven’t had anyone to DIFU. Do it for us. Because of the internet, artists can control what they release and when and what it looks and sounds like. Chance The Rapper, Macklemore, A lot of hip hop / pop artists are doing it themselves. But they have some help. We don’t have any. So we’re actually trying to get away from the total DIY, and have some help so we can focus solely on the art and the show and the music.

AMFM: You guys have New York in your songs a lot. “Brooklyn to Babylon,” “Escape from NY,” “Rock Hood” all seem to be inspired by the city. How has the city influenced you all as individuals and musicians? Is the city the 7th band member?

SIMS: Growing up in Brooklyn is a strong feeling and life. You can’t shake that. Life experiences make up your art. So we are what we’ve experienced. Love Brooklyn. Love NYC. Such an interesting place to be from. Brooklyn Love to all!!! Bless UP!!! Rock Hood!!!

LEX: Duke Sims and myself grew up in Bensonhurst, Brooklyn and we’ve both lived in NYC our whole lives. I would definitely not call this city a seventh member but it, like anything else you’re surrounded by, has influenced us as much as say Augusta, Georgia influenced James Brown, or Long Island influenced Twisted Sister. It’s where we’re from but the road is where we want to be.